“Hurry Up and Run Fast” and Other Questionable Quotes from Coaches

I’ve been teaching athletes to run fast for over 25 years and although I can’t say I’ve seen and heard it all, I’ve witnessed some pretty ridiculous things. While I believe that avoiding the exposure of your brain to sheer stupidity is a good practice, sometimes we have to take in some of the bad to truly appreciate the good. It’s really goes back to the Yin and Yang philosophy: Light can’t exist without darkness, and good must co-exist with evil. Hence, good training must be rolled in once in a while with bottom feeder training practices to provide contrasting examples and a teachable moment. But I’ve waste enough time attempting to be philosophical.

I don’t believe anyone would disagree that speed is an important quality for success in sports. Where it seems we run into problems is when we get into discussions about how to make people faster for their sport. Conventional wisdom (i.e. the less informed people) would say that you have to work ‘harder’ to get faster. This usually takes the form of doing more work in less time and making sure the athletes are sweating, feeling pain and looking very tired by the end of the training session. This approach only works with individuals who are extremely out of shape and would probably achieve a positive adaptation from walking up a flight of steps.

Good speed training involves the proper application of stress (i.e. running fast at maximal output) with adequate recovery times (i.e. full recoveries) between repetitions. Each training session must also involve an appropriate volume of work – not the greatest amount of work – to ensure that the athlete adapts adequately and moves forward with advanced abilities. The accumulation of high quality work, not outrageous training volumes, will result in superior performances. I naively think this is a rather simple and easily absorbed concept that everyone should be able to grasp without delving into deep discussions on super-compensation theory, nervous system recovery, hormonal adaptations and protein synthesis. Yet, I still find that I am trying to convince the “flat” proponents that, yes, the world is actually round.

Where this all gets very interesting is in the application of ‘make-believe’ training concepts to the practice and training-camp environments of team sports, particularly at the highest levels of performance. I have a particular interest in the arrangement of practices for American football because of the intermittent nature of the sport relative to other field sports such as rugby and soccer, which tend to be more continuous. American football at the NFL level has an average duration per play of five to six seconds, with approximately 35 seconds between plays. If there is a stoppage between plays (i.e. penalty, time-out), this interval can be stretched out to up to 113 seconds between plays – with such stoppages occurring 20% of the time. This works out to 9% of all time spent on actually playing the game, with the remaining 91% going to walking to the line of scrimmage and setting up the next play, or a work to rest ratio of about 1 to 10. Also, keep in mind that the average offensive drive in the NFL is comprised of approximately eight plays (roughly six minutes of elapsed time). And after that drive, the players get to stand on the sidelines for six minutes and watch the other team’s offence do the same thing – on average.

Let’s keep this concept of over-simplification going. If I wanted my team to practice as they play, I would keep all of my work to rest at the 1 to 10 ratio to be – dare I say – specific. So, for a 10-minute team period in practice, running 11 plays would be game specific. A 15-minute team period would involve 16 plays. Strangely enough, many practices involve 12 plays per 10-minute period and 16-18 plays per 15-minute period. I am certain that most pro-teams’ GPS systems, in comparing game play versus practice metrics, would mirror my assumptions. So we are all good, right? There’s nothing like sport science and specificity at work.

Let’s look at how those work-to-rest intervals impact pure speed and acceleration in a typical linear sprint training session. We need to also factor in the fact that a sprint training session would not involve physical contact, trash talking, crowd noise and other mental distractions that could increase the stress load from repetition to repetition. As you can see from the figure below, speed quality cannot be maintained from rep-to-rep with such a short recovery period between runs. Thus, at a work-to-rest ratio of 1 to 10, players get slower and slower through the workout. This is not voodoo, but pure energy systems theory. If this is happening in a simple linear sprint workout, you can imagine what is happening during a game or practice, particularly of these periods/drives are layered upon each other over a two-hour duration. Athletes are running slower and slower. 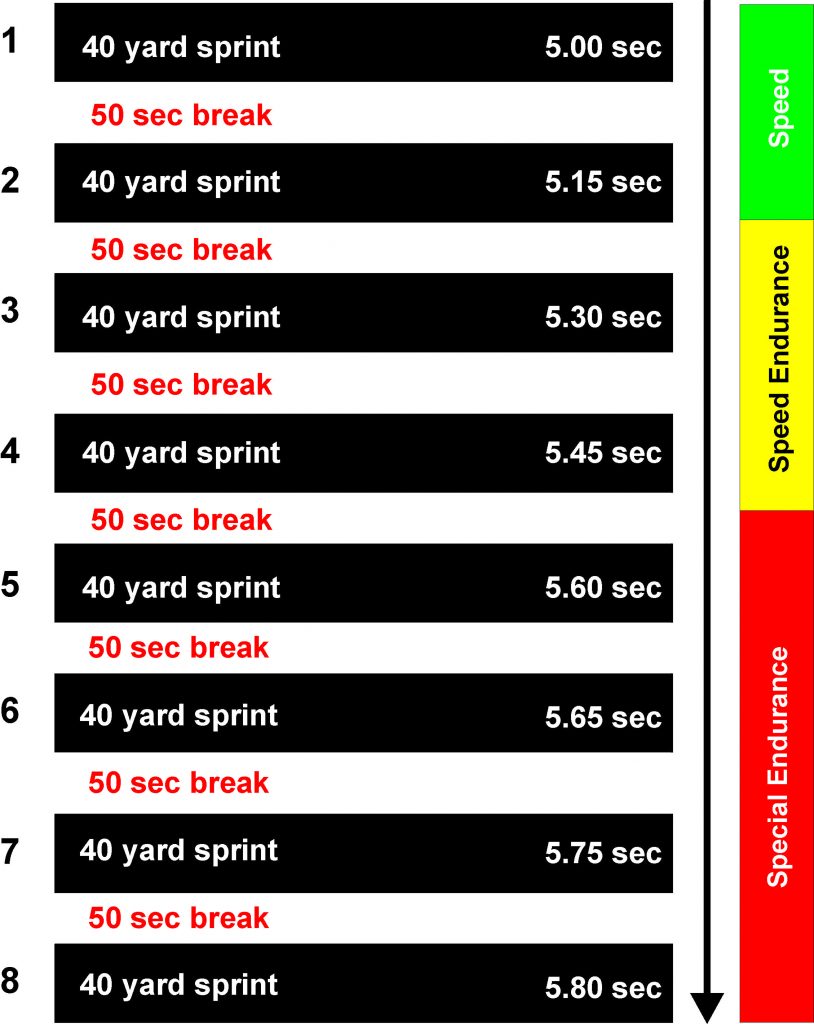 Now, training theory tells us we can approach practice one of two ways if we want to get creative. We can try to run more plays in the same period of time, or we can run fewer plays in the same time. In the former example, coaches believe they are actually making the game faster. More snaps of the football in the same or shorter period of time equals a faster game for their brains. The irony is that this type of approach actually makes the game slower and slower in terms of movement velocity. As you can see from the previous diagram, players will quickly slip into the “Special Endurance” zone – a zone where players subsist in a state of fatigue-laden survival (typically 15 to 45 seconds of continuous glycolytic work at sub-maximal efforts). For those in the know, this is also referred to as “training camp” conditions. The problem with this zone is that coordination is hampered, positive speed adaptations are nowhere to be found and injuries become more and more prevalent. But because coaches are rushing players through this approach in a drunken stupor with lots of yelling and screaming, they naively believe the game is faster.

In the opposite approach – running less plays in the same amount of time – speed is preserved and coordination is maximized. In this case, I would argue that you are practicing as you would hope to play, not practicing as you currently play. If we increase movement velocity, force application, technical proficiency and overall quality of performance, the body will adapt in that direction. If we try to achieve fatigue and slow down movement velocity, the body will adapt in the opposite direction. 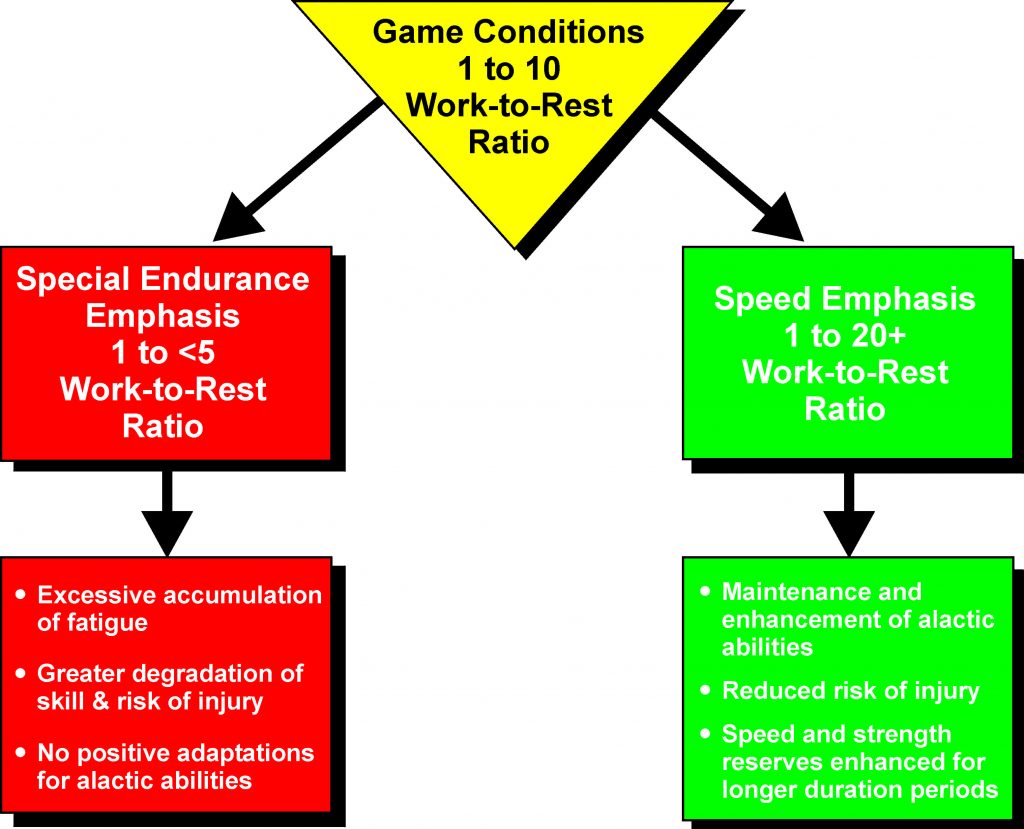 If a team had the courage to develop ratios for implementing these different scenarios in practice, it is my recommendation that they lean heavily towards the alactic enhancement approach, while maintaining small doses of the special endurance approach. I have already formulated some ratios for practice and training camp that I believe would result in significant improvements in the overall quality of practice, and would readily transfer to games. This would not necessarily dovetail with the attitude of coaches who want to run as many play as possible in every period, but at least it gives them a beacon to steer the ship towards. As such, I have created an option that would be more in line with current coaching practices – Option A. I have also identified more physiologically appropriate ratios identified in Option B. 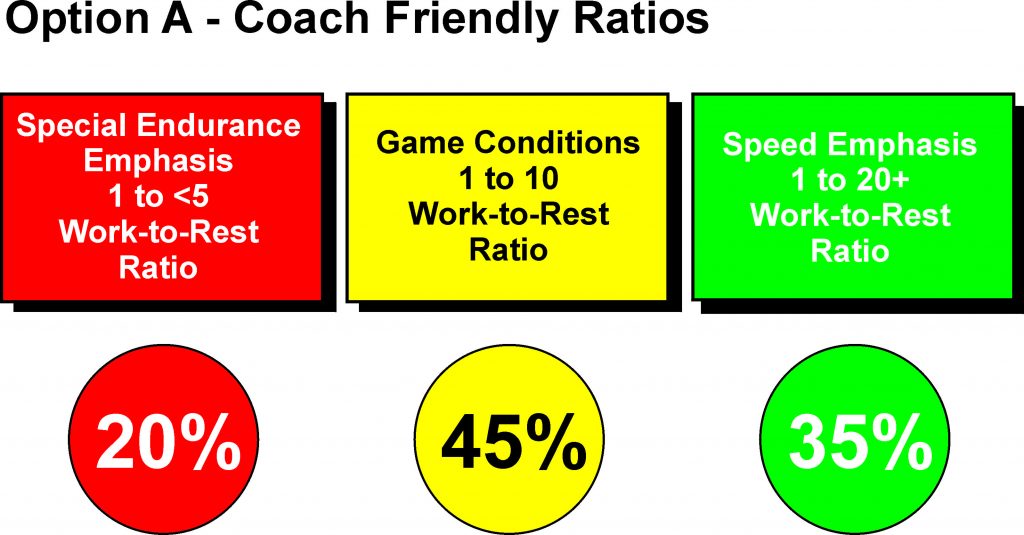 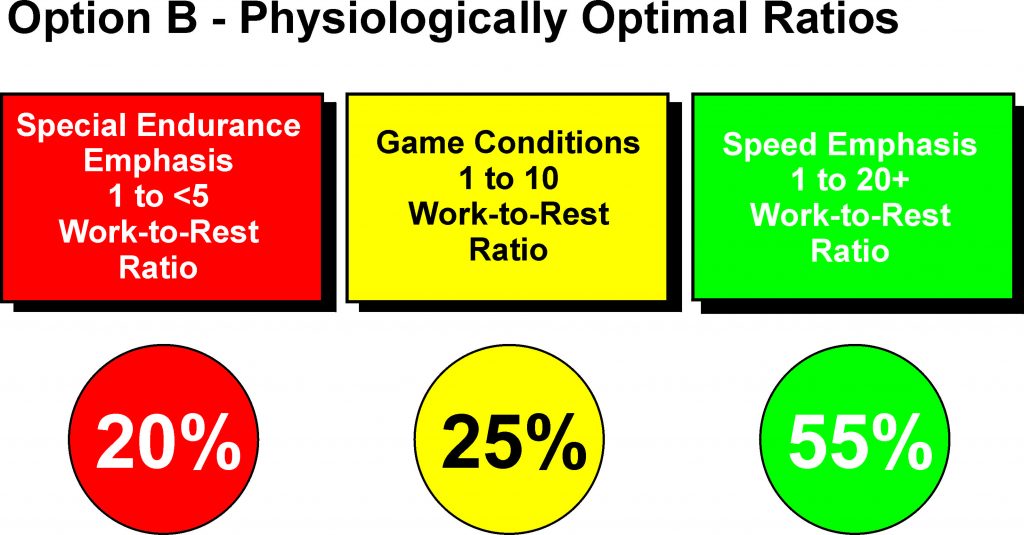 The intent in both cases is to significantly increase the proportion of work performed in the high-velocity/high-intensity zone, above and beyond what is typically required in a game situation. This type of approach ensures that all players develop and hone their skills at game speed or faster – which means enhanced adaptation of these skills. Timing is optimized, strategies and game-plans are properly vetted, and players stay fresh and less prone to injury under such conditions. The great thing about Option B is that not only does it increase the quality of work significantly, it also reduces the total volume of work (because of expanded recovery times) to more manageable totals. Intensity is never the enemy of players. In most cases, it is excessive volume at sub-maximal efforts that leads to injury.

To the average football coach, this approach likely sounds crazy. “Do less work? How can that be?” As I mentioned to a number of representatives from various teams at the NFL Combine, “Everyone is doing the same thing regardless of whether or not they believe they are different. They may call it something different or order it differently, but they are all doing the same type of work. All it takes is one team to truly adjust their training camp and practice approach from ‘survival’ mode to “performance enhancement” mode, and then we will see the difference on the field on game day, particularly as the season wears on.” Tradition and conventional thinking are getting in the way of big improvements in both performance and injury prevention. As such, Strength and Conditioning staff are limited in what they can prescribe, and become recovery and regeneration specialists – out of pure necessity – in an effort to keep the players from blowing up.

What I am proposing is not rocket science. It is basic science. Athletes cannot hope to excel and stay healthy if they are constantly working in a fatigued state. Nothing good will happen. The only glimmer of hope that a team has is that they know that every other team in the League is also practicing such a degree of insanity. The battle of attrition is being played out on a level playing field. The direction of progress is toward the optimization of training loads and recovery, both on and off the field. I cannot wait to see the results when someone finally gets it right.

Hurry Up and Run Fast