With most of the teams in the NFL starting their mandatory off-season training this week (Teams with returning head coaches start April 21st. Teams with new head coaches could begin as early as April 7th.), there have been a good number of Strength and Conditioning coaches left wondering if they have enough time to really make an impact with their players. In the past, strength coaches may have had as many as 12 weeks to prepare their players for pre-season training camps scheduled to begin mid-July. However, since the new collective bargaining agreement (CBA) came into effect prior to the 2013 NFL off-season, strength coaches have really only been permitted to undergo fully dedicated training with players for five weeks. This has left a lot of strength coaches to breathe a “collective” sigh and wonder if CBA actually stands for, “Can’t Build my Athletes.”

This phenomenon is not isolated to the NFL. Through conversations with various coaches and consultants working with NHL and NBA teams I have found that many pro sports teams are handcuffed when it comes to making sure their athletes continue to train hard and train smart during the off-season period. One NHL team strength coach commented that he could not contact his players in the off-season to see how their training was going. The players, however, could contact the strength coach if they had any questions or wanted to voluntarily offer information regarding their progress. This struck me as quite odd simply because each team is investing large amounts of money into these players. Shouldn’t the team be able to make sure their players are staying in shape in the off-season? If a player doesn’t follow through on his off-season training program, shows up for training camp out of shape and gets injured, is it not the fault of the player? To me, it sounds like a really big headache for professional teams and something that will become more apparent as the impact of these agreements comes to fruition over the next few years.

Regardless of who is right or who is wrong, it leads me to a number of conclusions regarding how teams and coaches must approach the off-season and, in many respects, the composition of their organizations. Provided below are my thoughts:

If training and conditioning is slowly being drawn out of the equation, it remains quite obvious that the teams with the best talent will have the best chance to make it to the post-season, succeed in the playoffs and, ultimately, win the championship trophy. Thus, talent identification becomes even more important and draft day becomes a significantly more anxious time. Because of the pressure mounting on teams to make the ‘right’ selection on draft day, I surmise that teams will over-analyze events such as the NFL combine and run the risk of making even bigger blunders when it comes to ‘building’ their teams. Predictive analytics may seem like the answer to many organizations, but as Henk Kraaijenhof wrote in one of his recent blog articles: “Linear thinking doesn’t work in biology, nor in many other fields.”

Players must have the right combination of talent and character to make it work for teams in this new generation of collective bargaining bliss. If teams cannot mandate that players work out with their staff in the off-season, it will be up to the players to find the proper physical trainer and follow an appropriate training program diligently. Michael Jordan had the motivation to build his own basketball court and gym in his house and invite teammates to train with him in the off-season. Do players of this era have the same drive and determination? The salaries are bigger and the commitments are leaner but does this translate into better performance on game-day? In this current climate of non-mandatory off-season work, players must take it upon themselves to “get it done” in the off-season. Consistent communication with team strength and conditioning staff during the off-season must be viewed as a positive effort on the part of the players. It must form the basis of a total team effort throughout the year if a team hopes to be successful.

3. Strength Coaches Must Grow a Personality

Long gone are the days of the growling, shouting strength coach who was known for intimidating players into getting their workouts done in the off-season. Strength coaches must now find new ways to motivate players without insulting them or threatening to go to the coach or GM. In actuality, strength coaches must connect with players on a personal level and develop a relationship of trust. This does not mean that the strength coach becomes the wingman for a pro athlete scoping out the local bars and nightclubs. It does mean that the strength coach must work harder to individualize his services for his players and find out what works best for each athlete that steps into his gym. In cases where the strength coach can contact players in the off-season, a consistent line of communication is a must. This communication cannot take the form of, “Are you getting your workouts done?” It must be more along the lines of, “How are things coming along? Is there anything I can do to make things work better for you?” While some may view this as the growth of a kinder and gentler but more passive strength and conditioning coach, I see it as a necessary adaptation of the profession if strength coaches want to remain relevant and significant contributors. 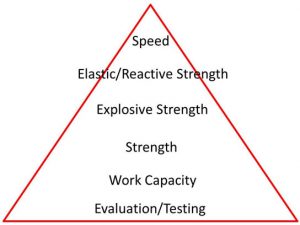 If the players are only given small windows in which to train with the team, strength and conditioning staff must focus on building and maintaining foundational qualities such as work capacity, strength, power and acceleration abilities. If an athlete gets too far away from these training elements, significant detraining can occur, placing the athlete at not only a performance disadvantage, but more importantly greater risk of serious injury. While the players’ personal trainers may encourage them to work more on ‘sport-specific’ training activities in the off-season, such a course of action may expose the athlete to greater over-use problems and reduced resilience throughout the season. Some proportion of work must prepare athletes for the realities of pre-season training camp – performing multiple reps of their position-specific responsibilities. However, a general approach to strength and conditioning will pay greater dividends over the course of a long season and, potentially, a successful post-season.

In a previous article, I discussed the high incidence of hamstring injuries during NFL training camps. While all teams are in a rush to introduce game-speed drills over a high number of repetitions, coaches are well advised to include a gradual progression of work in training camp scenarios. The goal should be to achieve a digestible minimum of high intensity work (i.e. acceleration, power, maximum strength) in the initial phase of training sessions. Remember, small doses can be stimulatory and create adequate adaptation responses that can form a robust foundation for subsequent high-intensity sessions. Moving too quickly into larger volumes of high intensity work can lead to technical flaws, fatigue and injury. Strength coaches that have a precise plan will have greater results during times when compressed schedules are a reality.

Professional teams must employ the best staff in the area of injury treatment and return-to-play management. Teams that consistently have the greatest number of man-hours lost to injury will not succeed. No longer will a team suffice with athletic training staff that simply use ice packs, anti-inflammatory pills, DMSO and ultrasound units to get the job done. Rehabilitation professionals with a proven track record of getting players back on the field of play in a timely manner is a must for teams that want to seriously contend for a championship. If we assume that less off-season training will lead to a greater probability of injury for players, the back end of the equation – rehabilitation and recovery – must be exceptional. Find the best doctors, physical therapists and return-to-play practitioners that money can buy. This is one of the best ways to protect the team’s investment and ensure that the best players are ready to play once the post-season arrives.

It is already common practice for professional athletes to train with their own private trainers in the off-season. As with all professions, there are good ones and not so good ones. The objective of any pro team should be to ensure that their players train in the off-season with the good ones. I’m not certain whether or not pro teams actually do this currently, but it would be in their best interest to develop a network of service providers that work with their players in the off-season. Many players may already have their personal preference when it comes to a trainer, but it would be in the team’s best interest to develop a connection with like-minded service providers and cultivate a long-term relationship. For new players to the team, they could be introduced to private trainers that the team feels mirrors their training philosophy and has a history of clear communication with the team. In many ways, professional strength coaches may have to become strength and conditioning “coordinators” in the off-season should this trend continue.

It is not uncommon to hear comments from pro strength and conditioning staff such as “trying to do my best given the circumstances” and “my hands are tied.” I’m assuming the recent changes to collective bargaining agreements have been made with the intention of “preserving the health and well-being” of today’s professional athletes. However, such changes can easily have the opposite effect with players showing up to training camps without the proper physical preparation in place. Teams cannot turn a blind eye to the impacts of these new collective bargaining agreements. If teams are prudent, they will embrace the current reality and make the adjustments necessary to optimize the situation and set themselves apart from other teams. I will be watching closely over the next five years to see how athletes and teams fare with injuries and athlete longevity.