When instructing the non-Olympic Weightlifting athlete who has never performed Olympic Style Weightlifting (OSW) exercises or exercise alternatives (i.e. pulls), one error often observed occurs during the athlete’s upper extremity involvement during the exercise execution. Inexperienced athletes will often excessively pull the barbell with their arms instead of allowing a proper lower extremity contribution for vertical barbell velocity and successful exercise performance. This instructional exercise offered to me years ago by my good friend Al Vermeil will provide feedback to the athlete and assist in ensuring an appropriate lower extremity contribution for proper technical exercise performance.

The athlete assumes a “hang” position exercise posture while holding a wooden dowel positioned against the popliteal fossa at the posterior aspect of the knee. A clean or snatch grip is incorporated upon the dowel depending upon the specific exercise of instruction (Figure 1). 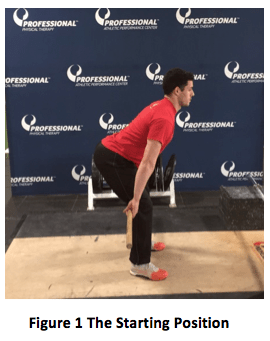 The athlete slowly extends their body vertically while allowing the wooden dowel to rise against the posterior aspect of their legs, concluding in a position of triple extension on the balls of their feet with their shoulders shrugged (Figure 2). The exercise is then repeated at faster tempos to generate a greater exercise velocity performance via the lower extremities. 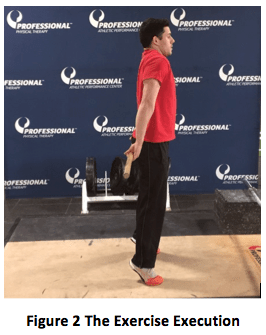