Pacquiao’s Shoulder: Five Questions That Need to be Answered

As the public has been made aware that Manny Pacquiao is scheduled for right shoulder rotator cuff surgery, the Monday morning quarterback may ask how this may have affected his abilities in the ring against Floyd Mayweather? Did this injury play a role in his boxing performance? Here are some key questions that may tell us if the outcome could have been different and, perhaps, if a rematch is on the horizon.

1. What is the rotator cuff?

The rotator cuff of the shoulder is comprised of 4 muscles, the supraspinatus, the infraspinatus, teres minor and the subscapularis. The main function of the rotator cuff is to keep the humeral head stabilized in the center of the glenoid (socket) during changing shoulder joint positioning and high velocity movement.

2. Which rotator cuff muscle(s) were torn?

This is the $64,000 question. Although the literature exhibits that the supraspinatus is the most frequently torn rotator cuff muscle, arguably the subscapularis is considered the most important of this muscle group as it is a great stabilizer and is an internal rotator of the shoulder.

Since Pacquiao is a southpaw his right hand would be his lead hand. Therefore, this extremity would produce the highest volume of punches thrown (i.e. jabs) resulting in higher levels of rotator cuff fatigue due to punching volume and deceleration (recoil) demands. Research has demonstrated that excessive fatigue of a healthy rotator cuff causes the humeral head to rise off-center while lifting as little as a five pound weight. The increased physical stress and level of fatigue to a torn rotator cuff during the later rounds would likely result in the cuff’s decreased ability to stabilize and maintain the humeral head in the proper position of the glenoid. With the humeral head off center, the consequences of increased pain, and decreased force output would likely occur. Only Manny Pacquiao would truly know how this affected his performance throughout the fight.

4. Did the torn rotator cuff cause Manny Pacquiao to lose the fight? 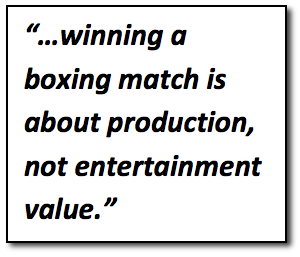 As a torn rotator cuff certainly did not help Pacquiao, this question could really not be answered given the numerous variables at play in such a contest. Both fighters were prepared for the fight and both were aware of their circumstances when entering the ring. Give Mayweather his credit as he did win the fight based on his accuracy, volume and efficiency of work. It may not have been as entertaining as people had hoped, but winning a boxing match is about production, not entertainment value.

There is a risk with all surgery but Manny Pacquiao’s return will likely be based on his desire to fight versus the inabilities of his shoulder. He has a world renowned surgeon in Dr. Neal ElAttrache performing his surgery and with proper rehabilitation and hard work the odds favour his ability to return to the ring. Of course, we would all like to see a rematch with both fighters in top physical condition and health so that there are no questions as to the decisiveness of the outcome.